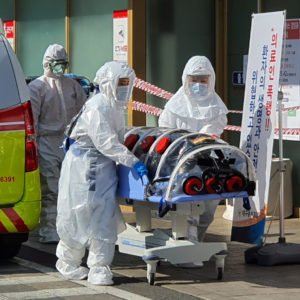 Coronavirus and planetary spreaders, but it is the Italians who for once I unknowingly stumbled into the cunning of a country that should be a friend as belonging to the European Union

From rumors, it seems that a 33 year old man, a German national, has released the Coronavirus in Europe but to pay the bitter price was Italy.

That the Italian Government sin of ignorance and is made up of simpletons we always deducted, but that came to be fooled by those who went under his arm to his prime minister we did not expect it.

Italians have been passed off as those who bore the coronavirus and planetary plague-spreaders were only them, but the background is very different media and how many would say: “the king is naked.”

Perhaps we begin to imagine why Europe was so magnanimous with Italy, hinting that there will be no major impact on a possible deficit, when we know that those who run the orchestra in the European Union is Germany that he tried to create friction between the beautiful country and China remaining silent, but has also put at risk thousands of Italian citizens.

This Europe is not the dream of many Europeans, it’s just a monetary union dictated and managed by banks, which continues to upset the financial balance of weaker states but have commercial resources to be able to put in big trouble when the two cornerstones are touched German and French, they can not enjoy the strength of the Made in Italy and are only states like the rogue states pose vetoes and other issues to put a spoke in the wheels of Italian ingenuity and Italian production (not the Italian Government ), where the coronavirus and spreaders are not only those who carry the Italian DNA.

But the Third World War, nowadays, is being fought in the financial area and in addition to failing to pay war reparations, Germany also claims the right to want to lead the European Union.

Having found Patient Zero German, who had attended a meeting together with a colleague from Shanghai asymptomatic but infected with the coronavirus can certainly not bring the situation back to normal and does not solve the problem of having accused Italians like coronavirus and planetary spreaders , it is certain that Germany, now that he has discovered his altar, would do well to stay silent when Italy will require European aid to deal with the emergency and to the financial damage that is undergoing or will not want to pay even these?

Someone says nothing knowing how things went, probably because he realizes that if he were saying a word would be forced to admit that in Italy the government currently in office is a group of parties never elected by the people and for justice only quest ‘last would yield the word or … ..the polls, as the famous grillini now have the flicker party.

To try to understand that what was stated in the article is true and not the usual words thrown into the wind, you just go and read the genetic map published in magazines that The New England Journal and Medicine, where it is shown that the same case may have given rise to a whole number of infections that now have become a global pandemic.

You need not be of virologists to understand that warm weather will not solve the problem, because in Qatar we have 35 degrees and in the UAE there are a few more, but not only, when you consider Brazil, Mexico and other States where the climate today is definitely hot, but they are countries that have not been spared from the coronavirus problem, perhaps we can begin to get an idea of â€‹â€‹what will happen in the future.

It would be interesting to understand why Germany has played with words talking about a “scientific unique” but at the same time spoke of “global pandemic” not pointing out that it is an outbreak of which only you are guilty.

The game in Germany is now in the open and this allowed him to not bring down his productions and his bags taking up the financial level remained, which however, is changing the locomotive of Europe to a simple wagon with trailer due of so many lies and subterfuge tempted also in the automotive sector with the United States of America.

Much could have been done to slow the coronavirus, but would force Europe and especially the European Union, which woke up very late, to isolate Germany although this could hardly prevent the spread of the epidemic.

This should give pause to those who believe strong pro-European and ask him one question: “is this the Europe that we all want?”

England this question if it made a few years ago and the result was not catastrophic as many hoped, but rather, contrary to all predictions has allowed the release of its citizens from a state of bondage to a l ‘ European Union has barricaded with its borders the 27 remaining and enabled the British state to recover its sovereignty as it was unable to bring democracy and independence in a union controlled by banks and not by the people as many of us would have liked.

Now Italy is on the brink, and one wonders what would be the moves of a government that does not listen even the parliamentary opposition, well aware that every move can result in an electoral catastrophe.

We all hope that the coronavirus is destroyed or rendered harmless by the vaccines under study in Israel, United States of America and other major world countries and that the Italian Government to undertake separate ways in the future, mindful that we must safeguard the national interest and not EVEN look always trust a Europe that unfortunately NOT always acts in the interest of the beautiful country but more often for purely nationalistic in certain states.

Who knows that the coronavirus not bring a little common sense in all the European and enables management of a country more beautiful in the world to get him back is also a hard-working state and primeggiante industry and employment.