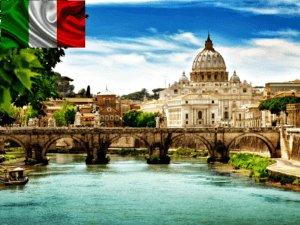 Italy is a country with a millenary history that gave birth to the greatest artists in both the Middle Ages and in more recent times and has a long history that is illuminated in the Roman Empire and has forged the brightest minds, the people of navigators, explorers, artists and many other categories where this country has been able to excel in the world

In Italy, the Italian culture is always appreciated in the world and above all the art of knowing how to reinvent who touched the manufacturing industrialization as Italy does not produce raw materials except mineral water and oil present in various parts of the territory but untapped for various reasons, and above all not to harm the nature landscape of an area to be seen.

The Italian terrain is mostly coastal and Italy is in fact a peninsula bordered to the north by France and Switzerland, separated by a very nice mountain range but also with a very important historical value: the Alps.

In Italy the territory is not completely flat because along the ridge Italian are the Apennines central-south over more or less vast hilly areas, not forgetting the very extensive plains as the Po Valley and the plains in Puglia where it originated one of the most appreciated wines in the world.

The Italian cuisine is typically Mediterranean, but being Italy consists of 20 regions, each of them has developed and maintained historical dishes whose delicacies are prized around the world and in fact the greatest Italian chefs can compete with its International chefs for the way they know how to treat and prepare food.

Italy has a surface that extends in length and its form of government is determined by a parliamentary republic, the currency used is the Euro as it is also one of the founding countries of the European Union and has about 60 million inhabitants who speak Italian, but also regional dialects where in some areas has also used the German, French and Slovene.

Italy is a country that boasts of very important agreements such as water Po, the Tevere, the Arno and the Adige and is rich basins in foothills of the Alps with lagi such as Lake Garda and Lake Maggiore, Lake Como and others also in central Italy volcanic such as Lake Bolsena and Lake of Castel Gandolfo, where we have to interrupt us as it is a country rich in sources and waters also make it a territory whose flora is appreciated by lovers the nature and whose beauties are often protected.

But Italy also has large inhabited islands such as Sicily and Sardinia and minor such as the Island of Elba, the Ants Islands, the Island of Ischia and other volcanic.

The Italian climate is diversified as its variability is given by the morphological structure of the territory, but it can be considered mild with the subtropical coastal areas further south.

The capital of Italy is Rome, a historical city whose beauty is world heritage, but of course many are the cities such as Milan tourist destination which is one of the most industrialized, Florence famous for its architecture and its artistic treasures preserved even at the famous museum of the Uffizi Gallery, Naples with its characteristic volcano in the world (Vesuvius), Palermo, Genoa and many other cities that have made Italy an open-air museum and for historicity and for the maintenance of its assets natural that has always attracted tourists from around the world.

The monotheistic religion in Italy is predominantly Christian and a Catholic, although there are other cults no less important as Judaism, whose synagogue in Rome is of importance and unique beauty, the Muslim religion that includes many mosques and the most important is that present in Rome, the Orthodox religion and other minor religions that make it a multi-cultural country.

The various governments have, since the last war, gave stability to the country although the first to find the flaws in the country are just Italians contrary to what the citizens of the neighboring states, but maybe that’s why in the end Italy is a wonderful country.