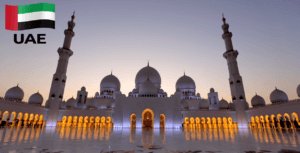 The United Arab Emirates (UAE) have developed for luxury and pomp that in our day would be the envy of a Pharaoh with skyscrapers among the highest in the world, futuristic shopping centers wrapped in luxury but they have also been able to maintain firm the old traditions with ancient villages between the desert expanses and local fishing communities.

The United Arab Emirates (UAE) is one of the richest nations in the world having a long time, we found their economic and financial main source in the oil which is considered the black gold in the world, but have been artfully rest a solid foundation in tourism and finance international becoming one of the world’s biggest competitors.

The form of government is a federal monarchy, the local language used is English besides local languages ããand the official currency, contrary to what many may think linked to the US Dollar, however, is the Emirati Dirham.

The United Arab Emirates (UAE) land is flat except for a mountainous area that delimits the border with neighboring Oman, but it can be considered an internal territory as it has the beautiful coastline dotted with coral reefs and islands that led to disputes with Iran and Qatar.

Being a mainly desert territory we find neither rivers nor lakes perennial but we can meet oasis that ensure the supply of fresh water from the subsurface particularly important for agriculture.

The development of the United Arab Emirates (UAE) in the construction industry is constantly evolving, with its beautiful and overhanging skyscrapers and multi-culturalism has allowed religions other than Muslim, such as Catholic and Hindu, might enter a small percentage in this pearl ‘ East without interfering with the historical heritage of the country.

The United Arab Emirates (UAE), the strong economic and financial power they hold, have allowed an exponential growth of the sectors of the luxury tourism, hotels and resorts by a thousand and one nights, attracting the attention of the biggest fashion houses, creation jewelry but most of rich managers.

The shape of the Emirate has meant that among the seven sheikhdoms would lay strong competition resulting in the development of residential areas for VIPs and prominent businessmen especially related to the world of oil, natural gas and international finance.

Strong common tourist Place of interest is given by the strong expansion of accommodation with theme parks and fairs promotions throughout the year give reason to visit the country.

The archaeological sites in the United Arab Emirates (UAE) also lead to a tourism scientific sociographic interest that have always been attractive to archaeologists, scholars and lovers of ancient history but also for the tourist who intends to take a walk in the desert riding a camel and who likes haggling with local souvenirs, see the typical desert dunes of Abu Dhabi or dive into the clear waters of the Persian Gulf surrounded by natural structures created by the coral.

Abu Dhabi, the capital and economic and financial center of the United Arab Emirates (UAE) is one of the existing modern megalopolis in the world who was born historically replacing a village of pearl fishermen that over time, have lost their sight due to continuous immersion in salt water for the collection of precious jewels on the sea floor and to them is due to a special process of a giant carpet that covers the floor of the most important and largest mosque in the Middle East.

So far Abu Dhabi has become one of the most important points for the oil trade but also has a sea whose clear waters, clear and temperate offer a unique appeal to the world for tourists.

Most major international brands flock to the capital from Tiffany with its eye-popping jewelry, Chanel, Cartier, Ferrari has created a theme park (World Theme Park), the Louvre Museum on Saadiyat, the Guggenheim Museum in Abu Dhabi and all lots of attractions to visit that can leave anyone stunned by their magnificence.