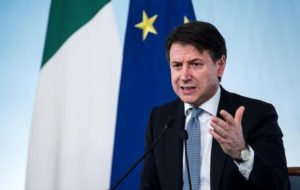 Italy slapped by the European Union, the other Member States, including the country that has plagued us (GERMANY) turn back on us and who we are to help ?Â

Italy slapped by its European partners, including the German state that brought us the pandemic, they decided to turn His back by refusing to provide the necessary medical supplies to protect medical workers and people who can not find the masks, but who He decides to go to meet the beautiful country is the Xiaomi, a Chinese manufacturer that gives a lot of boxes to the Italian civil protection.

The SHADOIT CONSULTANCY GROUP in London, yes, this company that only deals with aspects such as financial and IT consulting for other companies, as a result of the fact that some of its consultants are Italians, decided to get involved and to propose, after finding an importer in touch with important factories, the interest for the good of our fellow citizens find the FFP2 and FFP3 masks with class filters N99 and N95 (military class), masks N95 with filters and all health protections necessary and appropriate to protect operators of the Italian Civil Defense and health professionals, but not only, as it is contacting the other States at the global level.

It was supposed to provide the Italian Civil Protection which also have contacted and have not yet responded, the Italian community pharmacies of the red zone, but our society has found ten thousand obstacles ready to stop its ability not only to come up against bureaucracy Italian that even in times like these, if you have to pay, requires the CE mark (European Community), but if you receive gifts gladly accept them regardless of its origin and who would have furnished them is among other things a major global supplier and what we sorry immensely because he often entrepreneurs, just because Italians, have more contacts that can be made available to the own nation.

But get presents does not mean solving the problem of people, because Italians are cornered by a financial crisis that is them killing and coronavirus German import, since the flights with China had been suspended, is putting on his knees an Italian slapped, where we see so much incompetence and many friends of friends that you offer and then think about the post-crisis …… so-called “Saviors of the Homeland.”

The agreement was signed with a major Israeli companies present in Tel Aviv, but while FER.RE.IT of Reggio Emilia, pointed out that although prices in line with those proposed by the producers for the quality of the products were satisfactory but lacked the stamp CE (European Community) and the certificate of conformity (those who produce them is 3M and XIAOMI), the Italian state organs contacted did not even reply to forwarded emails among other things by an editor, but the protection Italian Civil, how they write Italian newspapers, quietly accept the protections from XIAOMI not under European certification.

This publisher has made contact with the importer in Tel Aviv and has sincerato of commercial agreements and the real possibility of having all health protections necessary to protect not only the civil protection, but also all health care providers and eventually the population Italian and that health centers were still FDA certified (USA certification much more stringent than the European one).

The problem is always that of a false and mendacious bureaucracy that wants to take advantage and make profit by friends of friends taking advantage of the disasters of Italy, while knowing that it could be secured so many people and especially the elderly … … maybe cost too much to ‘INPS?

Perhaps the friend of the politician in office do not buy enough or nothing if you are interested in the issue?

3M and XIAOMI provide other important countries such as Israel and indeed by all accounts is a state first exposed line and prepared to possible biological warfare, so we do not think that would put at risk the lives of their population.

Curiosity was born sovereign, it is our intention to see how, and if, the representatives of the Italian State will be in contact with us, but especially when and in what mode if anything they decide to do so.

We on our own, we are contacting other Member States and if the Italian representatives wake up too late, only they will be the cause of the lack of protection equipment because we are not a charity, but a company born to do business.

In Italy it slapped it is now common knowledge that if you are not a friend of some politician or some trumpet of politics that operates in associated companies, nothing can be done and nothing must move.

And then there is the problem of employers who go to other countries or guys who once graduates go away from Italy, or of satire that is made on the side of the Alps television and accuses Malta accommodate many Italians who are tired moving their residence in this COUNTRY CIVIL?

Certain questions are all answered, but, you know, just to save face on television for a few more votes you sell also what was never invented.

Italy has always been a country very ambiguous and strange, and now you have the assurance of why Italians abroad are treated very badly and their hosts denigrates Italy as a country of parasites and profiteers.

Do not be shocked by seeing what happens also in national emergencies, those who are elderly has seen a lot worse happen which sent troops to the Russian front with light and unsuitable equipment (WORLD WAR II), the massacre of Ustica, the Bologna massacre, the two dead judges who have sacrificed their lives for the freedom of so many southern Italians, not realizing that the local mafia were just what are called “soldiers”, because the leaders were well other people far more influential and state secrets that Democratic Republic and not a dictatorship should not exist with their compatriots (see the process of which are State-Mafia agreement were marked confidential recordings).

The demonstration of IGNORANCE because no DOCTOR, is of those who administer the most beautiful country of Europe we can listen live, from the mouth of those who now found himself He also hit by the coronavirus, a scourge that spares no one and that however, we do our best wishes for a safe and speedy recovery

This is Italy slapped that no Italian real birth would ever want to hear nominate, this is Italy who do not want good people, those who are disgusted because they do not vote for local political shift that would corrupt them with pleasures or money but that the local elections with 50 Euro manages to bribe some boy.

This is what sucks Italians.

Politicians expect that in voting the Italian population makes them elect for what they can say on television, but they have forgotten that football matches have been suspended and that the Italians are now wide awake and alert and are following step by step the various choices that they are making about the national crisis.

The Italian Prime Minister, Giuseppe Conte admits that a leak to a decree that would have to confine Lombardy, but of course, as usual, the friend of the friend of some political released, sparking panic of those who live in that region leading people, possibly ill, get in way to southern Italy risking the spread of the epidemic and endangering the rest of the Italian population.

But in the hands of the Government which is Italy?

The lack of a State that threatens the health of its citizens in order to maintain good relations with
a Europe that we can do without, at this point, is not a State worthy of being considered at pair at the Maduro government.

It has even got to THINK to do as in the field of front-line hospitals, choose who can live or die, evidently will mark his forehead with a red mark those who should not enter into intensive care because they are too old or already debilitated by some major illness.

And then we are surprised that other European countries do the heavy satire on Italy?

And for emergencies such as heart attacks and more?!?

What will they do?!?

Patients will abandon them to their fate tearing their coats and betrayed the oath to Hippocrates?

We hope more in a revolt and rejection of health care to save the lives of all if you were to find yourself in a situation degenerated.

We hope in the future that things will change and that Italy could go back to being a true country free from the corrupt, loved by Italians and those who say they want not more corrupt when in the end the real corrupt are other people.